Video presentation of the Trail

This almost 40 km long trail, which articulates through thick woods, meadows, screes, lakes and peat bogs allows the hiker to enjoy some of the most spectacular landscapes of the Park and to spot the typical alpine fauna that lives in the area. Six days walking and five nights at high altitude are ideal to complete this fascinating itinerary, which is practicable in its entirety only in the months of July and August. 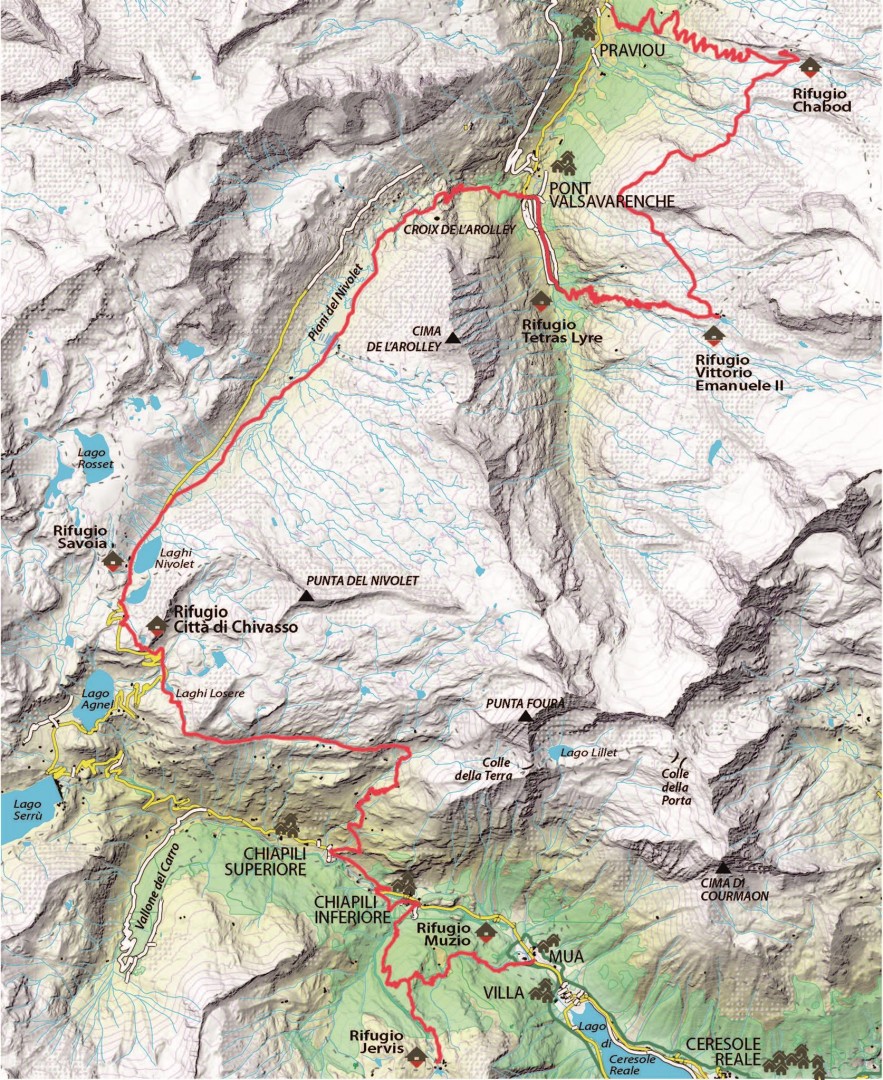 The itinerary day by day

The first part of the climb goes through a dense forest of larch and Swiss pine. Among their branches, it is possible to spot red squirrels and different species of tits, or hear the characteristic call of the spotted nutcracker. Once you have passed the Lavassey ranger house, you will have to go through some hairpin bends before entering a magnificent alpine meadow. The limit of the trees is now over and the view on the surrounding peaks is truly breathtaking. The trail that articulates along a nice stream goes up to the mountain hut, visible on the left just a few minutes before the arrive. 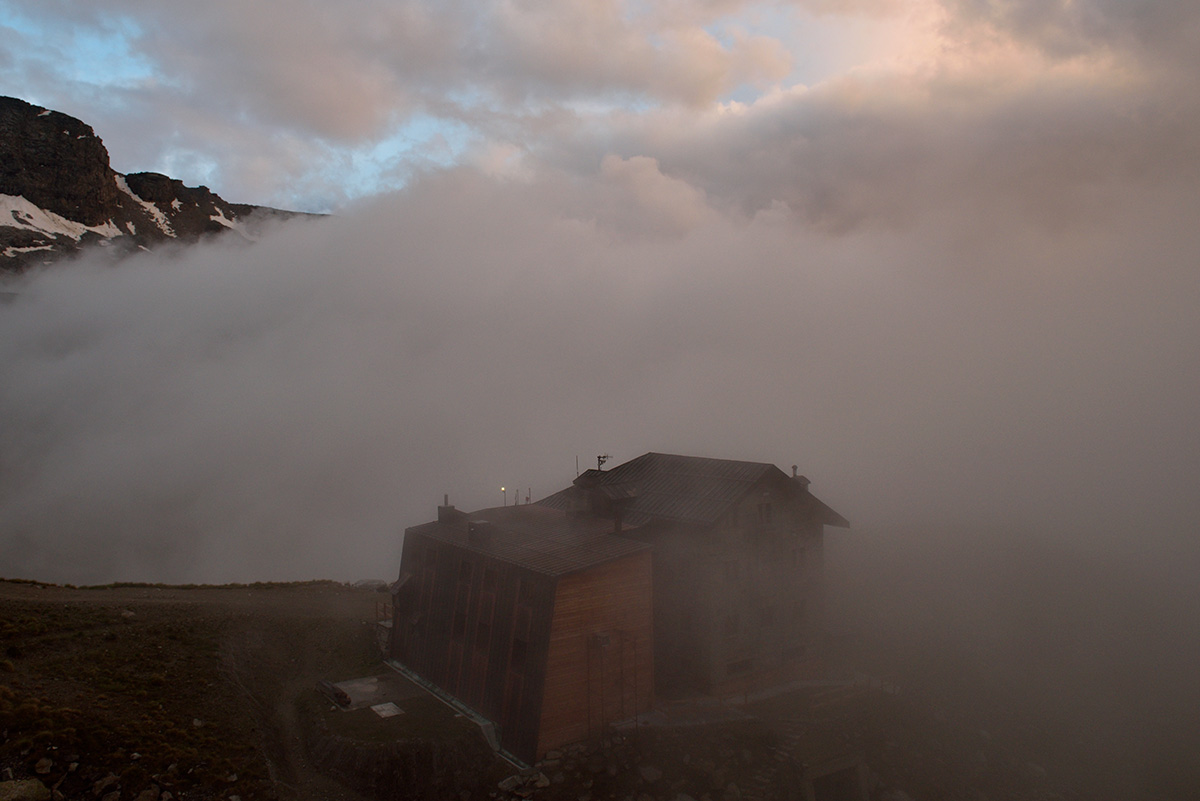 After crossing a little bridge, the trail becomes extremely scenic and goes across an area often chosen by chamois and ibex as grazing land during the first daylights. After facing a series of rather steep up and down, we manage to see the Vittorio Emanuele II mountain hut. A short detour allows you to reach the building, on the clear waters of Moncorvé lake. Here begins the real descent, which takes place on a well-traced path, first between rocky balconies and sloping grasslands, then through a thick larch forest. Arrived at the bottom of the valley, you meet the mountain hut after a few tens of meters. 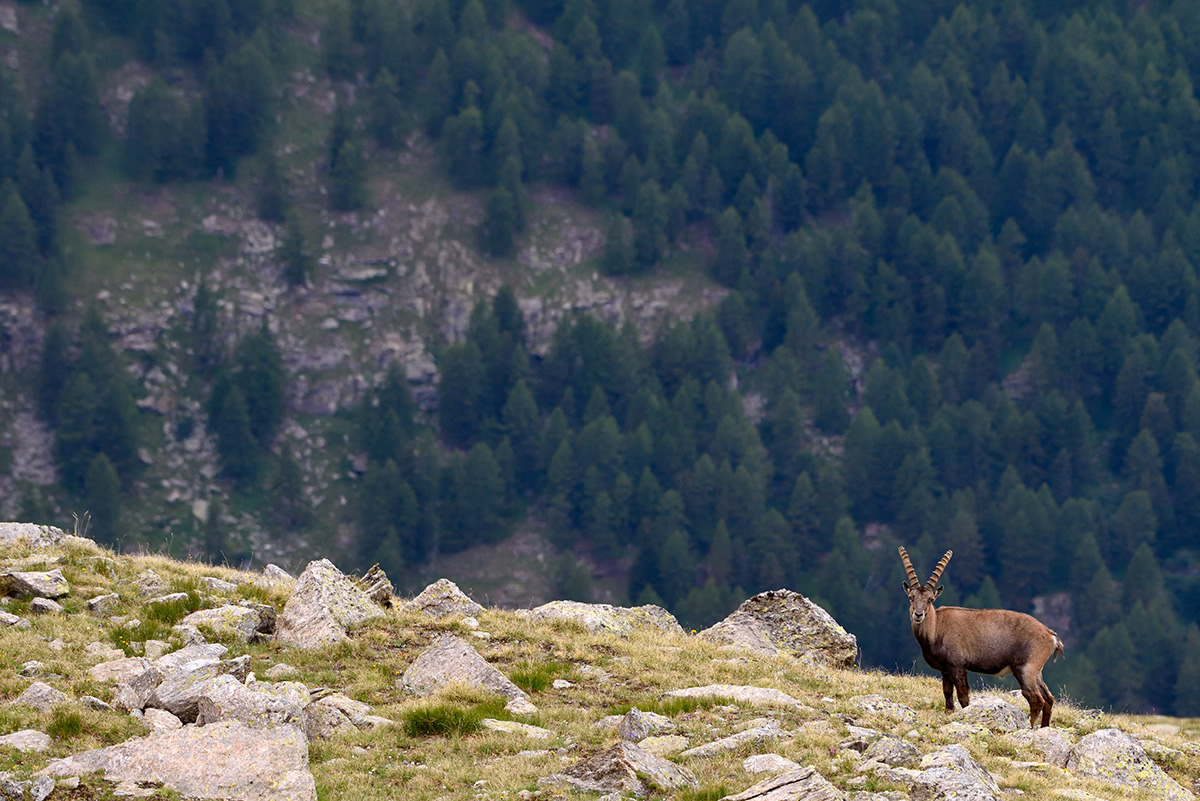 A comfortable, even path leads in a few minutes to the Gran Paradiso hotel. From here, the track climbs with wide bends, until you reach a beautiful waterfall and the Croce de la Rolley. The breathtaking view that can be enjoyed from the cross is just the prelude to something much more spectacular: a few hundred meters, in fact, and you will access the Nivolet plateau, a wide valley where a rich torrent full of trouts flows slowly and sinuously. The slope of the plateau is almost imperceptible, and the walk continues without jolts until the Savoia mountain hut. A short ascent, partly on paved road and partly on a path, leads to the final destination of the day. 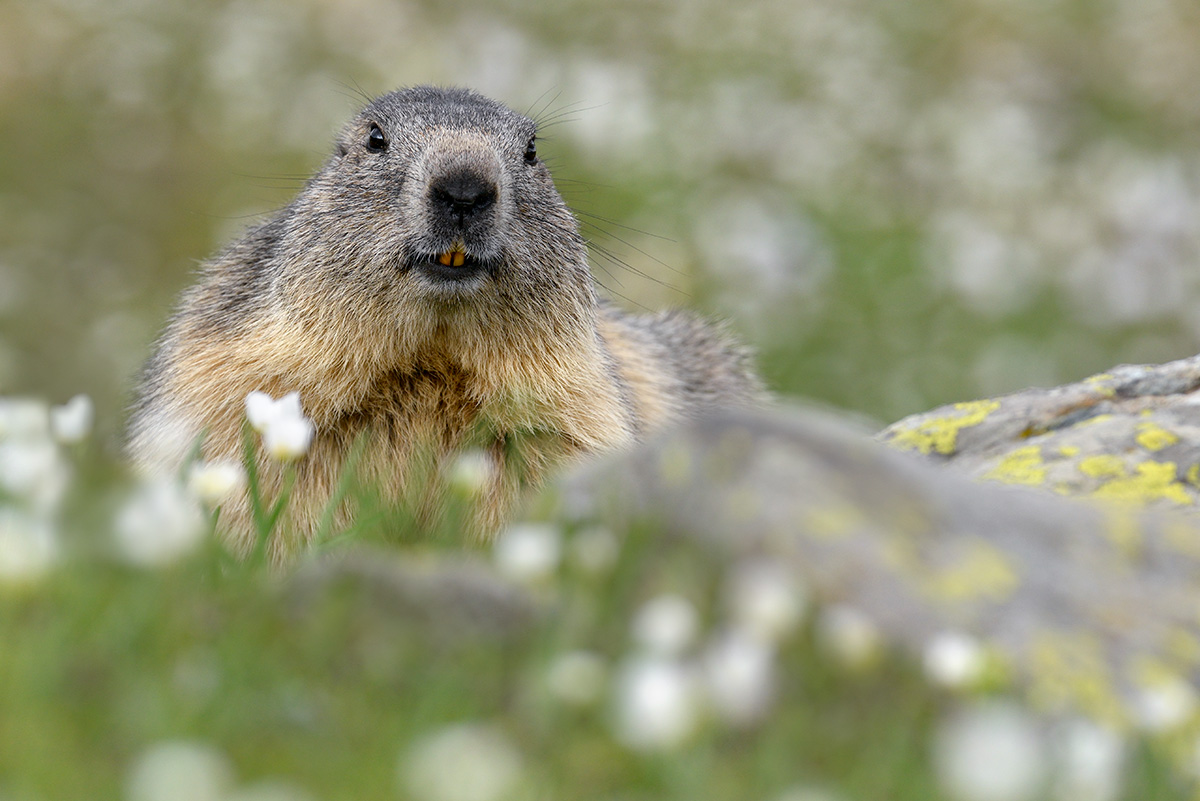 From the nearby Nivolet pass, you begin the descent by walking on the asphalt. After a few hairpin turns you reach the Losere lakes, where you take an old mule track, already used in the second half of the 1800s by the Savoia, who set up their hunting reserve in these lands. A flat even path allows you to enjoy a privileged point of view on Serrù lake, on the Bastalon ranger house and finally on Ceresole Reale lake. Ignoring the path that continues on the left, leading to Colle della Terra, you begin the real descent towards the valley's floor. Walking across pastures, meadows and rare rocky screes you will face a notable slant, until you reach the start of the Videsott path, in the hamlet of Chiapili Superiore: once again, the carriage road allows to reach the mountain hut in a short time. 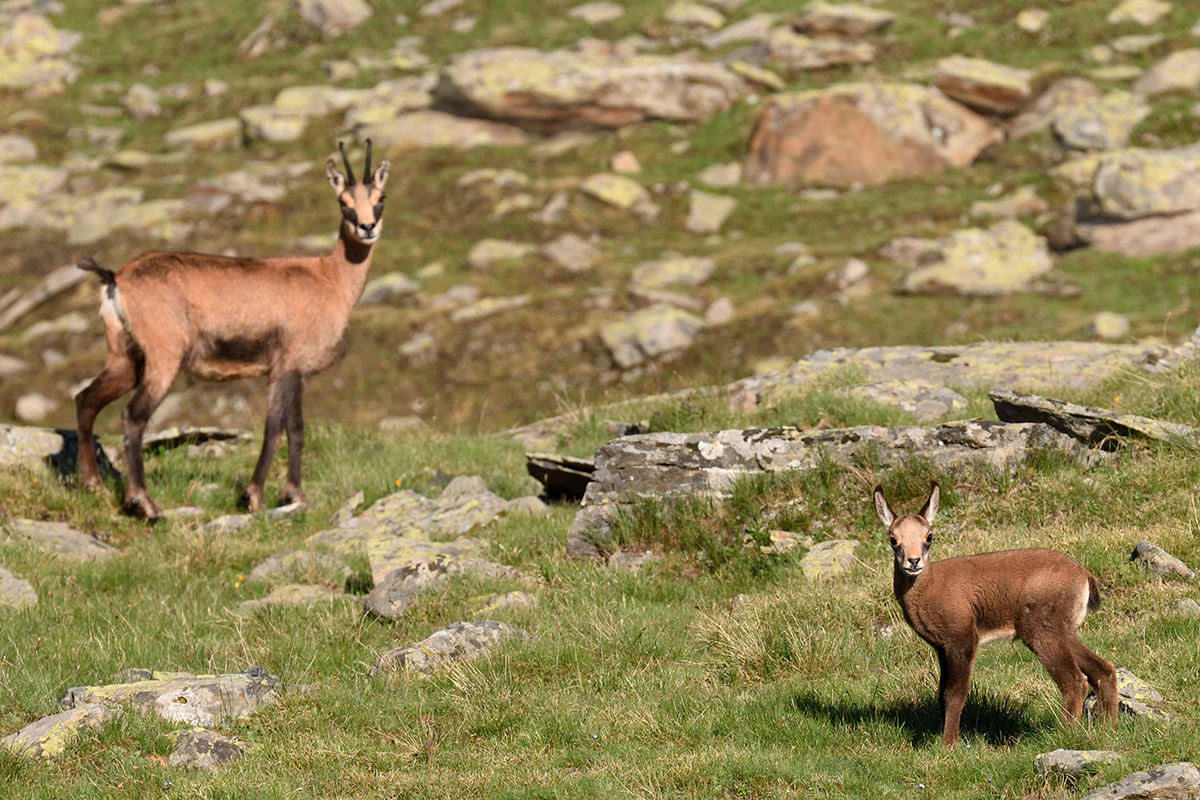 After walking a few tens of meters on the paved road, towards the lower part of the valley, we cross a small bridge next to Lo Sciatore bar. The path goes up, first on the meadow that in winter becomes a ski slope, then climbs into the woods. Among the many larches it is possible to admire a colorful carpet of rhododendrons, while some small abandoned stone buildings are found all along the path. Shortly before arriving at the daily destination you will come across remarkable flat rocks, covered here and there with specialized high altitude shrubs. Arrived near the mountain hut, you will enjoy an amazing view on the perennial snows that adorn the Levanne and Basei peaks. 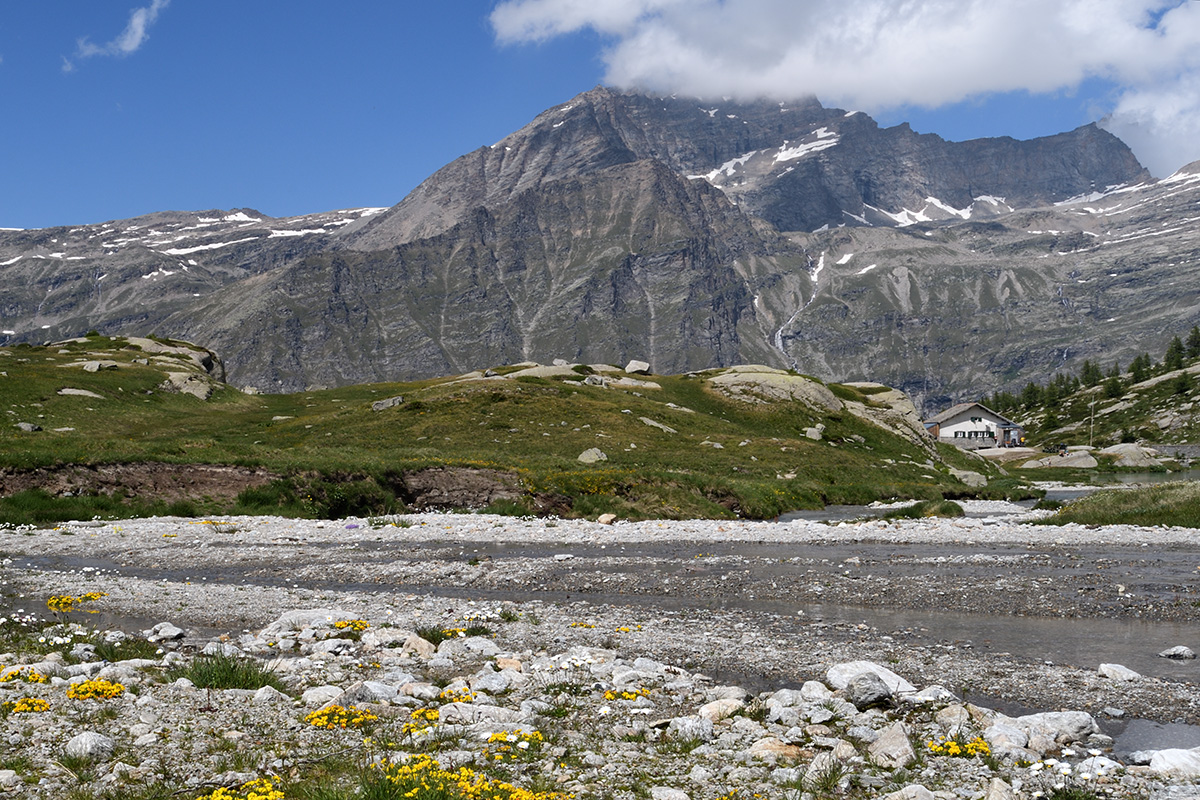 Follow the route of the previous day backwards, up to the junction that separates the trail signs 530 and 531. Take the first one keeping the right and you will descend through a thick forest of conifers. In a few minutes you will come across an interesting wetland dotted with rivulets and small creepers, which in July gets purple colored thanks to the flowering of numerous wild orchids. The trail ends at Mua hamlet, where a little bridge allows you to cross the Orco stream and return to the paved road. 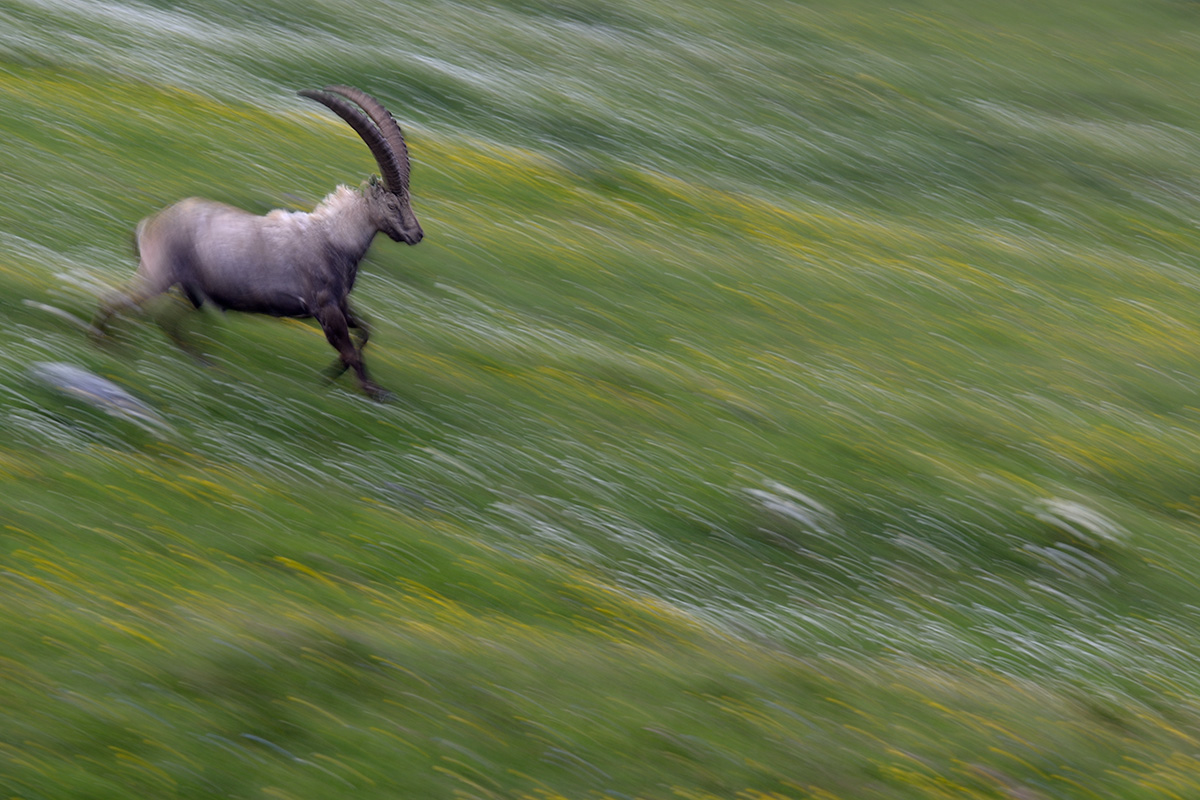 Where to stop before and after the Trail

La Pietra Felice, Introd (AO)
Do you want to get refreshed before leaving for the Trail? Reach the Aosta Valley a day in advance and take advantage of the hospitality of Riccardo, owner of this comfortable accommodation located in the characteristic village of Introd, just outside the Gran Paradiso National Park. A warm welcome and interesting suggestions on how to best enjoy the natural, cultural and gastronomic beauties of the area are waiting for you.

La Casa del Re, Ceresole Reale (TO)
Tired after the long Trail and searching for a moment of quietness? Stay in the Gran Paradiso National Park and recharge your batteries taking advantage of the hospitality of Barbara, owner of this charming accommodation located in the heart of Ceresole Reale. The hotel, inaugurated in 1888 and recently renovated, has been one of the locations chosen during summer holidays by the Savoia royal family and by Italian aristocracy. Among the illustrious customers there was also Giosuè Carducci, who from here, observing the surrounding mountains, composed the famous ode "Piemonte". 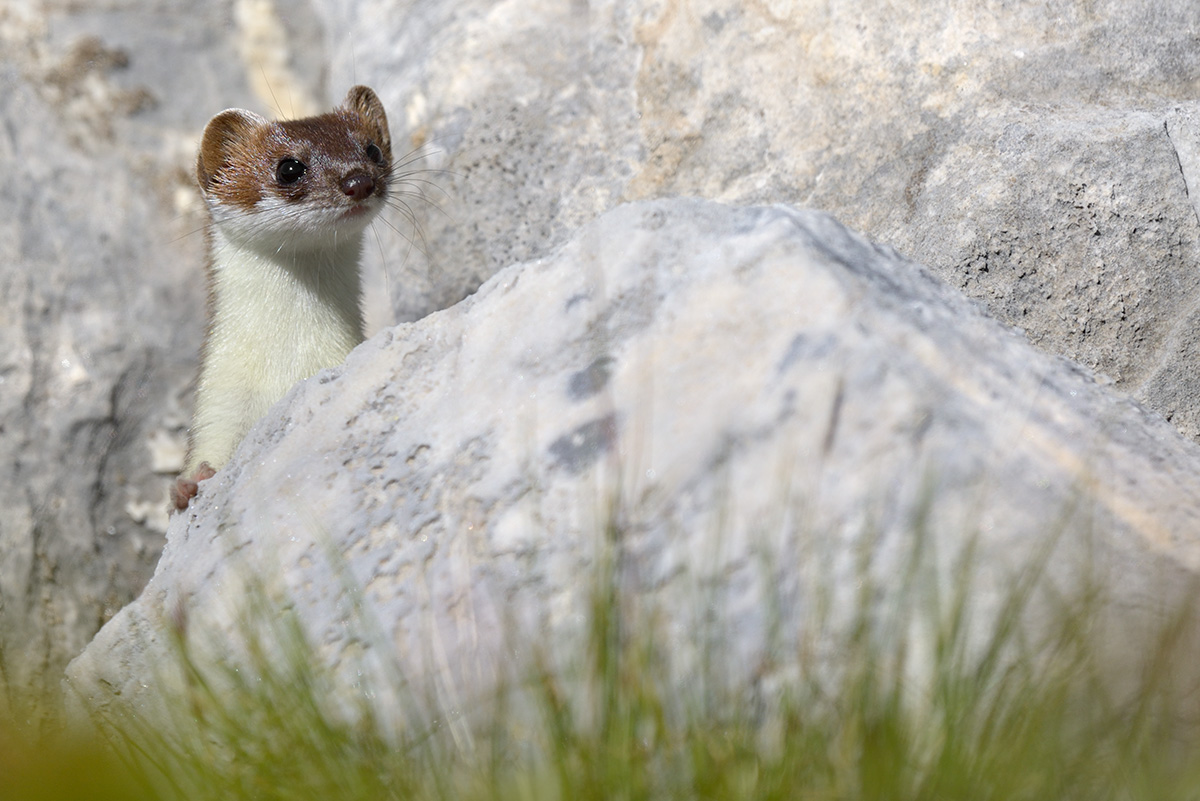 The Alpine Ibex, the star of the Trail

Undisputed symbol of the Gran Paradiso National Park, this majestic ungulate lives in the rocky environments and high altitude meadows of the Alps. The adult male can be distinguished thanks to the long curved horns, which can reach one meter in length. The female, smaller and lighter, is characterized by short and thin horns instead. The summer diet of this mammal is exclusively composed of fresh grass, while in the other seasons the species eats also sprouts, lichens, shrubs and even conifers needles.
At the beginning of the nineteenth century it was believed that the ibex, after hundreds years of indiscriminate hunting, became extinct on the whole European territory. However, this conviction was denied by the discovery of a forest inspector working in the Aosta Valley: in the impervious and steep mountains that surrounded the Gran Paradiso massif, there were still a hundred ibex surviving. With the official establishment of the Park, which took place in 1922, the ibex was finally declared a protected species.
Almost a century later, the ibex population has undergone and continues to undergo substantial variations within the Gran Paradiso National Park, probably related to the effects of climate change: the record number of nearly 5,000 individuals registered between the 1980s and 1990s is almost halved today. According to the census dated September 2011, only 2700 specimens are currently leaving in the area.
The Trail presented here, which aims to contribute to raising awareness about the importance of biodiversity conservation, finds its leading actor in the ibex, turning the spotlight on a unique and fascinating animal, in the hope that this species can continue to be safeguarded and observed by future generations. 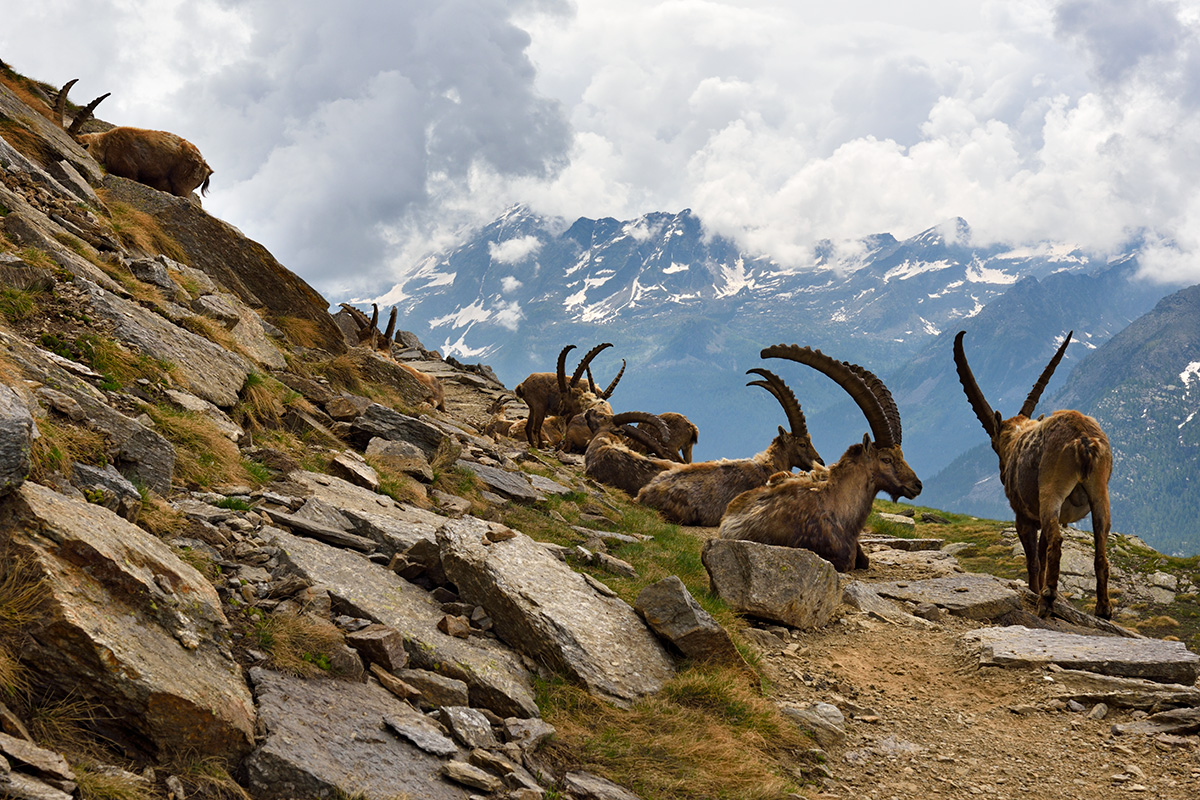 What to take with you on the Trail

Below is a list of tools and equipment to store in your backpack before leaving for the Trail. The list can be used as a hint by those wishing to undertake this experience, but it can and must be integrated with everything each hiker thinks he may need. 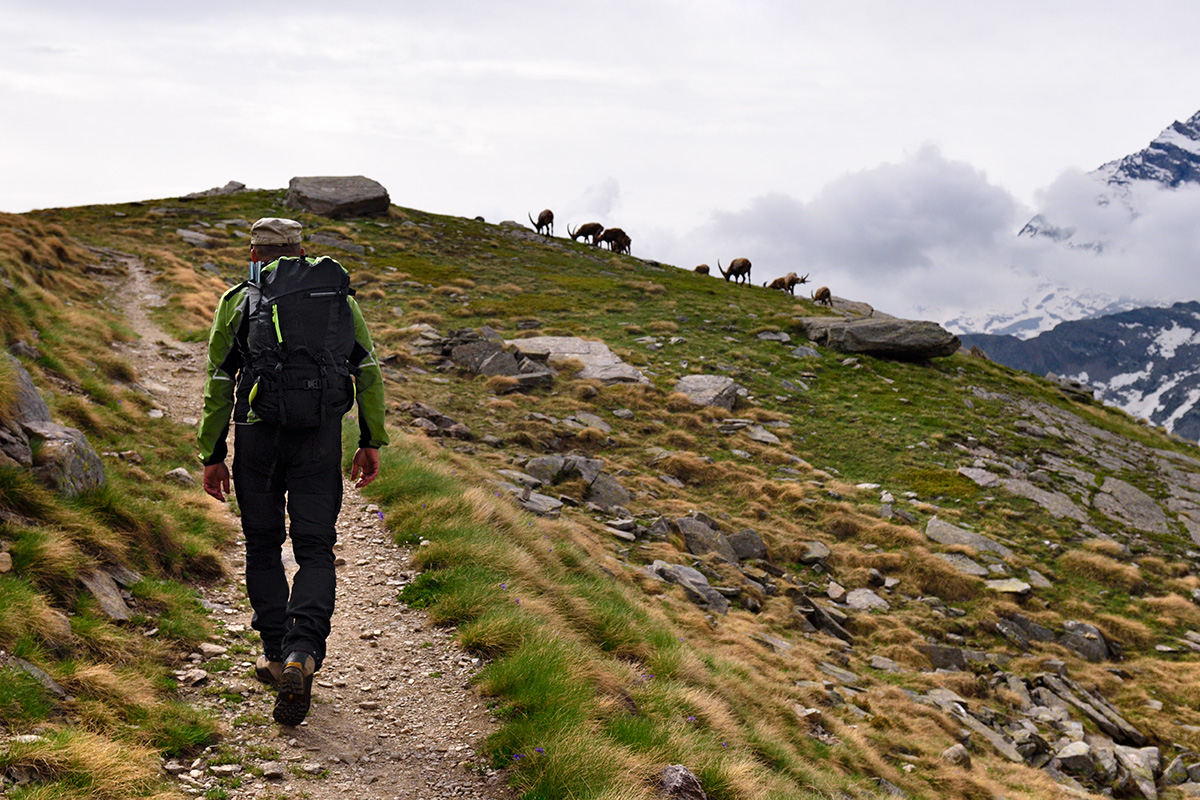 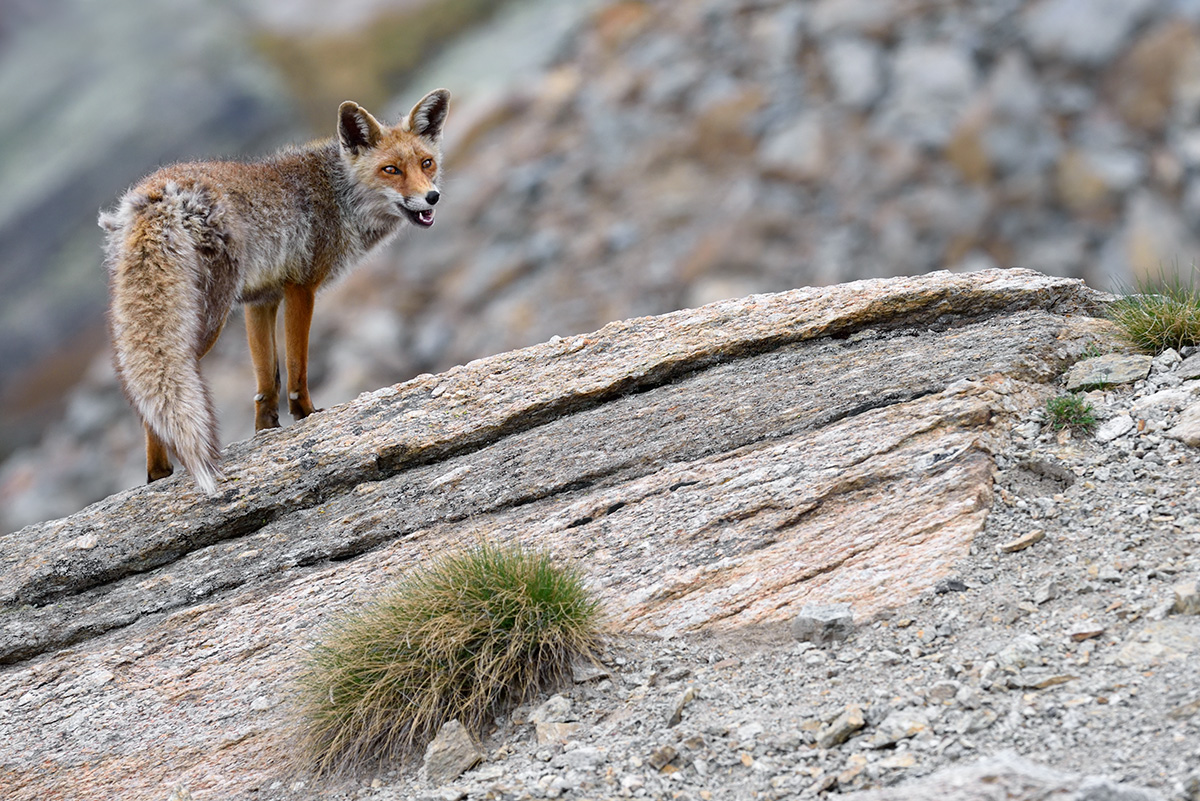 How the project was born

The Alpine Ibex Trail was conceived as a part of the Master's degree thesis entitled "Value creation for the territory, a comparison between the strategies of the Gran Paradiso National Park and the Alpi Marittime Natural Park" (degree course in Business Management, Marketing and Strategy at the School of Management and Economics of Turin), written by wildlife photographer Luca Giordano and aims to contribute to the enhancement of the first Italian National Park. The project is carried out in collaboration with Bianca Maria Minetti, wildlife photographer and near-graduate law student at the University of Bologna with a thesis concerning parks and the protection of the natural heritage, and with Luca Melcarne, young French wildlife photographer. 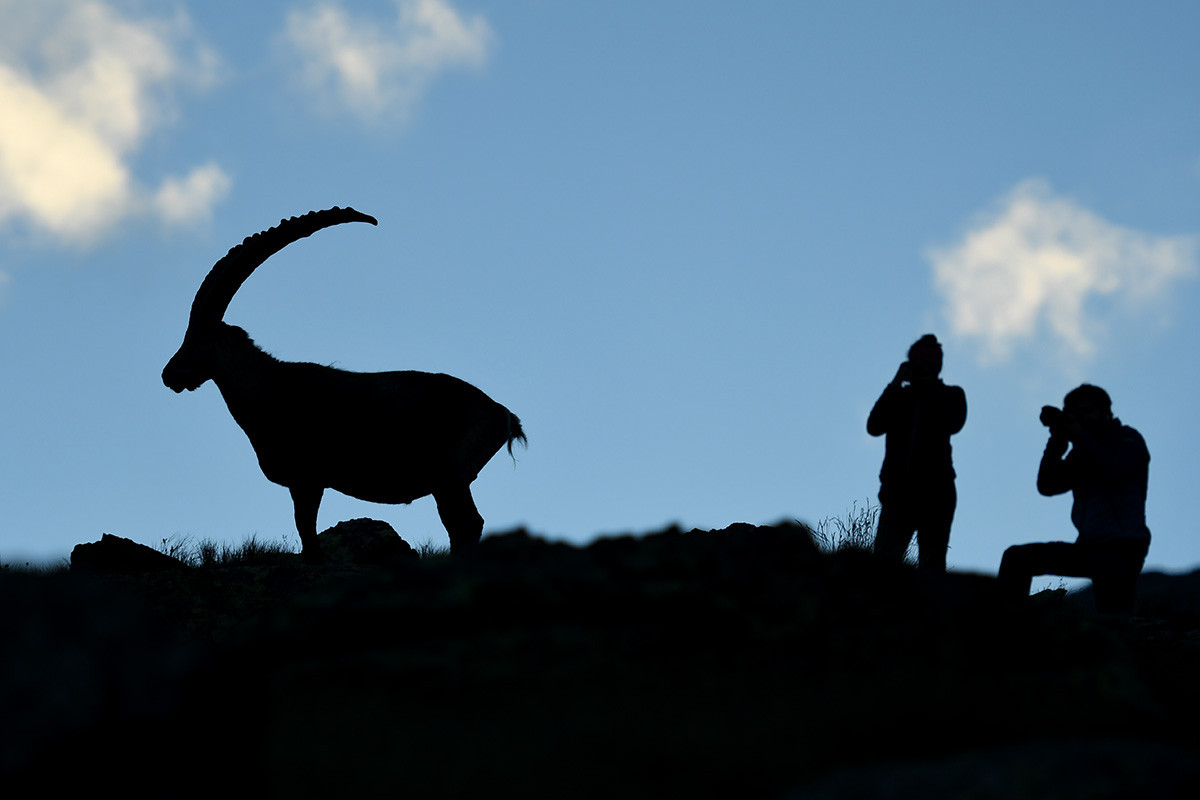